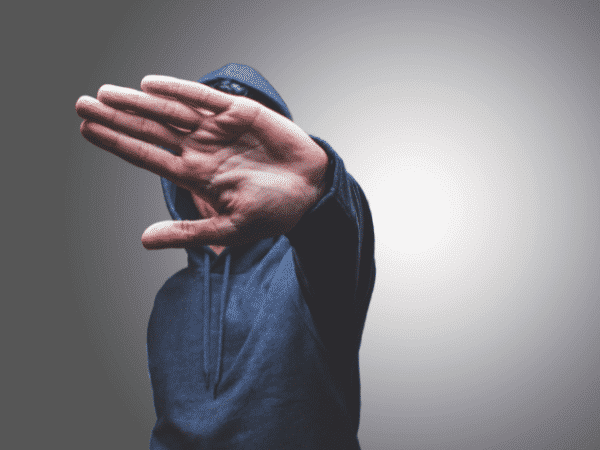 If you are struggling with alcohol addiction, you may be experiencing feelings of hopelessness. Many people with a history of addiction have a common fear. It’s the fear that they will never be able to break out of the cycle of recovery and relapse. However, scientists have analyzed behavioral patterns that are universal among people who are struggling to break free from addiction, and their findings can give you hope in the form of the Jellinek curve.

What Is the Jellinek Curve?

The processes depicted in the Jellinek curve were first described in the 1940s by a physiologist named E. M. Jellinek. Jellinek studied the progressive nature of alcohol addiction, using empiric evidence. He surveyed people who struggled with alcoholism to better understand the complex physiology behind addiction. Jellinek believed that addiction was a biological process akin to other physical diseases, not a moral failing on behalf of addicts themselves.

Throughout his data collection, Jellinek began to see common patterns in the addiction process, and he documented these extensively. Other researchers later expanded on his work, and the result of their collective findings is a U-shaped curve known as the Jellinek curve.

Although the Jellinek curve was originally developed to characterize the process of alcohol addiction and recovery, it has subsequently been correlated with other types of addiction, too. Today, the Jellinek curve can provide hope to anyone who struggles with substance abuse or dependency.

Understanding the Phases of the Jellinek Curve 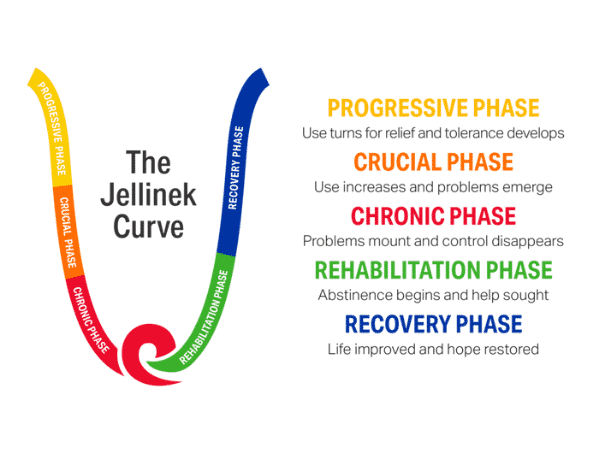 The Jellinek curve divides into four phases. The curve’s signature U-shape depicts an initial downward slide. It shows a base (this may the origin of the term “hitting rock bottom”). And also shows an upward slope.

The four Jellinek curve phases are as follows.

During the pre-alcoholic stage, you might be a social drinker or you might drink alone. This stage may span many years, and you may not realize that you are developing a problematic relationship with alcohol. Changes to your habits during the pre-alcoholic phase may occur gradually or suddenly. But ultimately you will begin to drink (or use other substances) as a way to manage your emotions or to cope with stress.

In this so-called “prodromal phase,” you may notice that you are not only drinking as a way to manage your emotions. But you are also drinking as a way to cope with the problems as a result of your drinking. You may start to notice difficulties with your personal relationships as a result of this toxic loop. You may also begin to experience physical problems from drinking, such as blacking out.

In this chronic phase, you may feel that you have completely lost control of your drinking behavior. You may experience long periods of intoxication, in which you seem to lose track of memories or time. You may be reducing the amount of food that you eat because you are getting the majority of your daily calories through alcohol. Your body may have trouble keeping weight on because you are not getting proper nutrition and, because your liver is overwhelmed, you may begin to develop symptoms of alcohol-related disease and decreased mental acuity.

How the Jellinek Curve Provides Hope for People with Addiction

The four phases of the Jellinek curve only represent the first half of the addiction and recovery journey. After Jellinek described his stages of alcoholism, another researcher, Max Glatt, used similar methods to depict a predictable process of recovery from alcohol addiction. For many people who have struggled with alcoholism and substance use disorders, the most important phase of all comes after phase four, with the upward slope of the curve, which represents recovery from alcoholism. 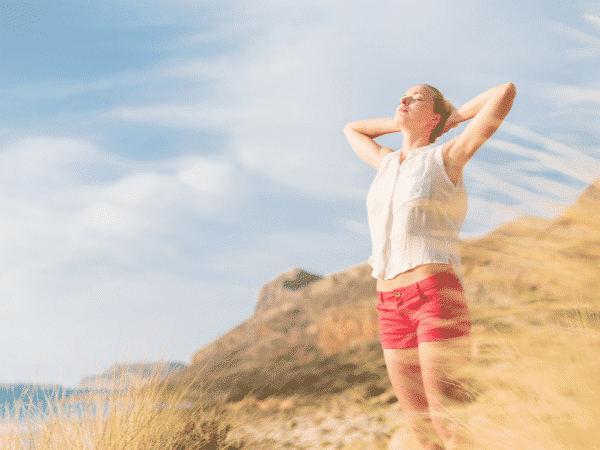 During alcoholism recovery, you can finally break free of the cycle and begin the work of rehabilitation. During rehabilitation, you can surrender to your feelings of helplessness and truly ask for help. You can understand that, just as the first four phases of the Jellinek curve are predictable and stepwise, so is your recovery journey. Alcoholism is an illness. And the Jellinek curve shows that though can progressively worsen, it can also be progressively overcome.

Mapping Out Your Own Course Through Recovery

As shown in the Jellinek curve phases, alcoholism is a biological disorder that can be completely overcome. If you are recovering from alcohol addiction, or another substance use disorder, you are not alone. Many people who are on the upward rehabilitative slope of the Jellinek curve will have setbacks, causing them to relapse and slide back down again.

When it comes to the Jellinek curve and relapse, there is still hope. Just as you can move one direction on the curve, and undo progress made, you can move in the other direction. And then, you can regain ground. It is important to understand that your personal course through recovery from addiction may not look the same as anyone else’s. However, the Jellinek framework can help you understand where you are in your journey. It also shows what resources you may need to keep moving forward.

While difficult, this journey is not impossible. Alcoholism is a treatable disease. If you are considering getting treated for alcoholism in Miami, many resources are available to help guide you. Reach out today by calling 800-719-1090 or visiting the Summer House Detox Center at 13550 Memorial Highway, Miami, FL 33161.

PrevPreviousCBD For Withdrawal: Does CBD help with addiction?
NextMethadone Detox: Getting People Out of Methadone AddictionNext