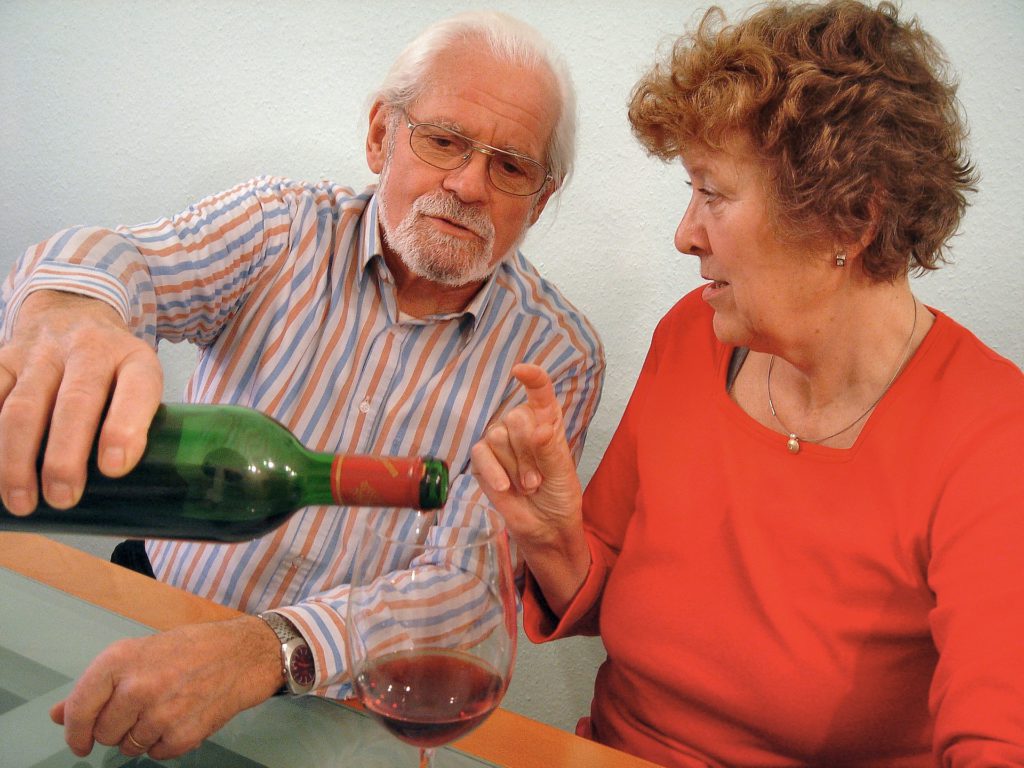 Is My Drinking a Problem?

If you are an older person, you may have engaged in drinking alcohol for most of your life without any issues. However, have you recently begun to experience negative consequences from drinking that never occurred before? For example, have your family and friends recently staged an intervention expressing their concern over your drinking habits? Have you recently been caught drinking and driving, having resulted in a DUI or DWI? Perhaps you find yourself waking up with a hangover, or you’re afraid that your life is becoming unmanageable due to your use of alcohol. Maybe you are an older person who never drank much when you were younger but began drinking more due to boredom once you officially retired, or you experienced grief over the death of a spouse.

Regardless of whether drinking is a new behavior or a lifelong one, you may have concerns over your drinking, or you may be worried about an older family member.

I’ve Never Had a Problem with Alcohol Before

These negative outcomes associated with drinking may be confusing to you if you are an older adult, as you may find that your lifelong drinking habits are suddenly affecting you differently, resulting in problems where none existed before. Part of the reason for these changes may be due to the way that alcohol affects older people. As you age, your body does change. Now, at 60 or 70 years of age, you may feel intoxicated after having two or three glasses of wine, whereas when you were in your 30s and 40s, you were able to drink more without feeling such results. The increased effects of alcohol on an older person’s body can lead to an increased risk of falls, motor vehicle accidents, and injuries such as broken bones.

In some cases, you and your family may assume that the effects of alcohol, such as confusion or a loss of balance, are the result of aging, unaware that these outcomes may be resulting from the use of alcohol.

If you are ready to take the next step in managing your drinking problem, alcohol detox can provide you with a safe environment where you can receive medical oversight and emotional support to help you begin the process of recovery.

Is Alcohol Use that Big of an Issue?

In the United States, it is estimated that 14 million people display signs of alcohol use disorder (AUD). However, less than 8% of those who need treatment actually receive it. Alcohol rehab is something that a majority of people who need it never get, and the consequences on your health and relationships can be extremely negative.

Alcohol is responsible for roughly half of all deaths from liver disease. Prolonged use also increases a person’s risk of many types of cancer, such as oral, stomach, and breast cancer. Also, 29 people die every day in the U.S. due to alcohol-related crashes, costing an estimated $44 billion a year.

Among older adults, studies indicate that 40% of people over the age of 65 use alcohol. Alcohol use for older people is especially concerning as it can interfere with many types of medications that older people take, as well as aggravating health issues that are common in older adults, including diabetes, high blood pressure, and memory issues.

Another concern regarding alcohol use among older adults is the tendency of alcohol to numb pain and mask physical symptoms, such as chest pain, which could indicate a heart attack and need for urgent medical intervention.

Signs of an Alcohol Use Disorder

You may still wonder if you or your loved one has a problem with alcohol. Some signs of AUD include experiencing a compulsive and uncontrollable need to drink. If you have two or more of the below symptoms, you may have an AUD:

Not everyone who has a drinking problem will meet the criteria for an AUD, but many people still use alcohol in an unhealthy and unsafe manner. Around 25% of the adult population has engaged in heavy drinking, or binge drinking, within the past month. Among adults over age 65, one in 10 of them report binge drinking in the last month. Binge drinking means that a person drinks enough alcohol in a sitting to raise their blood alcohol level to 0.08. Typically, this means having five or more drinks (for men) and four or more drinks (for women) in a two-hour period. A person can be considered a heavy drinker if they engage in binge drinking five or more times per month. Among senior adults, one in 40 engages in heavy drinking.

Can I Stop Drinking at Home?

If you are physically dependent on alcohol and you stop drinking, you might experience symptoms of alcohol withdrawal. While this is more likely to occur in those who drink a lot of alcohol over a prolonged period, it can also occur in teenagers and those who may not realize how much their body has become dependent upon alcohol. Signs of physical withdrawal include:

Coma and seizures can occur in people withdrawing from alcohol, even without DTs.

Why Can’t I Just Stop Drinking On My Own?

Because alcohol has the potential for such serious withdrawal symptoms, stopping on your own is not a good idea. People with epilepsy, a variety of brain conditions, or those who are using drugs are also at higher risk of complications during alcohol withdrawal.

Oftentimes, when people stop drinking on their own, the cravings for alcohol lead them to quickly relapse as well.

Studies indicate that one-third of people who receive alcohol rehab have no symptoms of alcohol problems a year later. Others substantially reduce their overall consumption. Treatment involves a multi-step process, including ongoing counseling, aftercare groups such as Alcoholics Anonymous (AA), and at times, medications. However, alcohol detox is the first step in treating an AUD.

Detox for Alcohol Use Disorder

Treatment for an alcohol use disorder starts with detox. Summer House Detox Center in Florida offers alcohol detox in a comfortable, supervised environment. People come to Summer House for alcohol detox from all over the United States.

At Summer House, you will find a tranquil environment, which will provide you with the medical oversight and support that you need during this critical time. You should be aware that alcohol detox is the only the first part of treatment for an alcohol use disorder, and many people need further treatment at another facility for a few days, or even a few weeks, following detox. If you need further treatment after completing alcohol detox at Summer House, staff members will make the necessary referrals and arrange for your transition to another program.

Contact Summer House Detox Center today at 800-719-1090 to speak with a qualified addiction specialist to see if you or your loved one needs detox treatment in Fort Lauderdale. Or fill out our free insurance verification form to determine whether treatment at Summer House can be covered by your health plan. You can also visit us at 13550 Memorial Highway Miami, FL 33161. We are open 24 hours a day, 7 days a week.